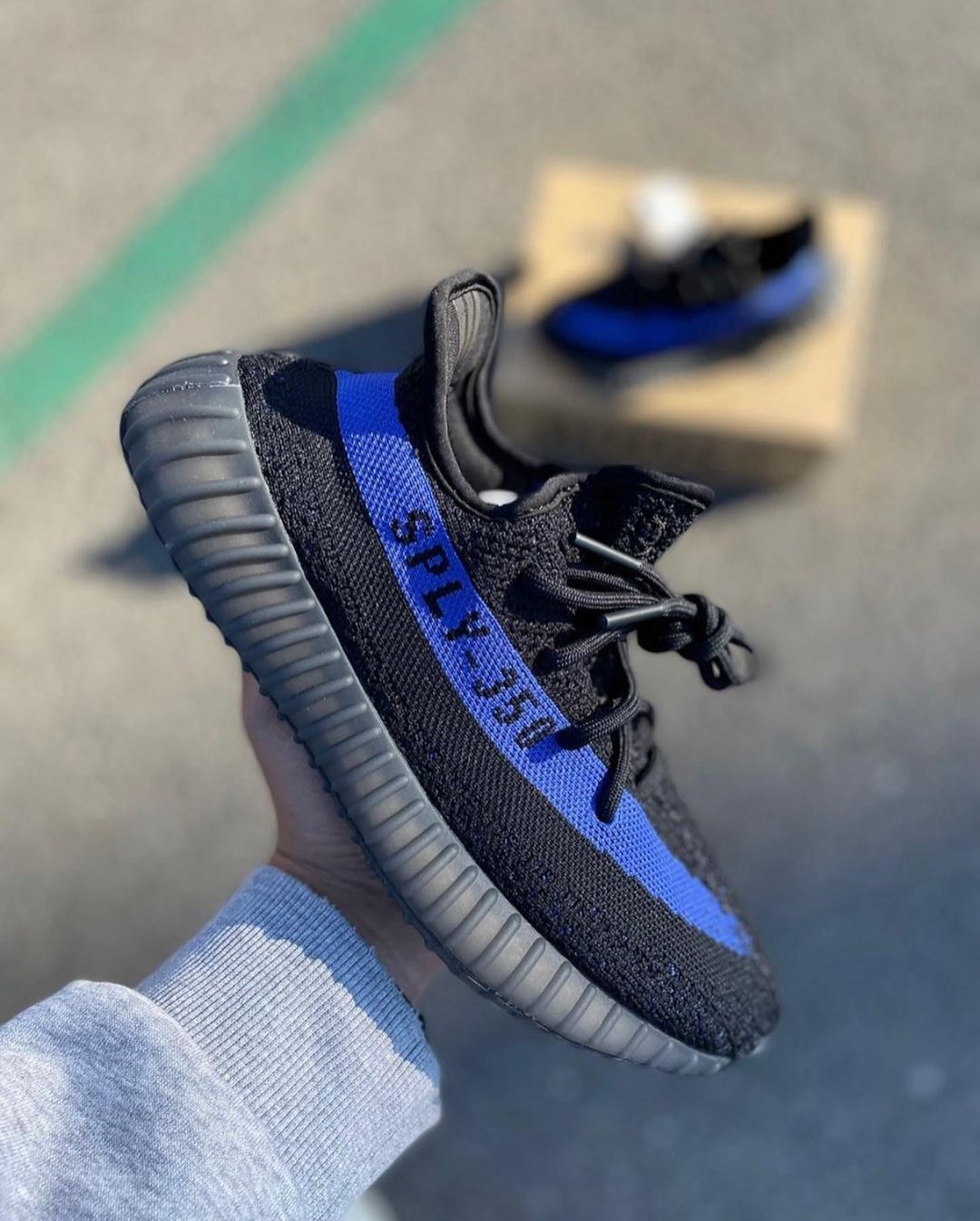 Yeezy‘s are now an indispensable part of the sneaker world. They are incredibly popular with many sneaker lovers and are therefore on many wish lists. They are not the cheapest sneakers, so it can be valuable to read up on the different variants that are available. At the moment, the Yeezy Boost 350 V2 Dazzling Blue is very popular with us. Are you curious about this shoe and would you like to know more? Then read on, because we will tell you everything you need to know about this great sneaker.

What exactly does the Yeezy Boost 350 V2 Dazzling Blue look like?

The Yeezy Boost 350 V2 Dazzling Blue is fairly similar in terms of colour blocking to the Black Friday Pack released in 2016. The shoe has a black primeknit upper and the lateral SPLY-350 stripe on the trainer is applied in a beautiful royal blue colour. Adidas and Yeezy have therefore named the shoe the Dazzling Blue. The sole is translucent and black. This applies to both the midsole and the outsole. It is a classy shoe with the stripe as an expressive element, which can make the shoe a real eye-catcher.

A little more information about the Yeezy Boost 350 in general

Of course, Yeezy has a lot of different iconic models. The Boost 350 is definitely one of them. This model first appeared on the 27th of June in 2015, making it a staple in the sneaker world for seven years now. The release of the very first Boost 350 ushered in a new era when it comes to sneakers. The first version was released in the colour “Turtle Dove”. Later on, even more different versions were added, such as the “Pirate Black”, the “Moonrock” and the “Oxford Tan”. Seven years later, the world famous owner of Yeezy, Kanye West, released the Yeezy Boost 350 V2 in the colour Dazzling Blue together with Adidas. So it’s a true classic, but just a little different.

But why choose the Yeezy Boost 350 V2 Dazzling Blue?

You might be thinking; if there are so many different Yeezy Boost 350s, why would I go for the Dazzling Blue one? That’s a good question. First of all, this version of the Yeezy Boost 350 is simple, yet striking. The contrast of the colour black with the royal blue makes the shoe perfect to combine with different outfits. You do pay some money for this sneaker, but then you do have an amazing shoe. Are you someone who likes flamboyant colours when it comes to your outfit? Or do you prefer everything in black? It doesn’t matter, because this shoe is really good for almost every outfit. They are comfortable, just like the other Yeezy‘s, which is of course a big advantage.

Where can I get a pair of these fantastic sneakers?

Are you already convinced of the fact that you really need to have these shoes? Then of course you can come to us. With us, you can buy your new pair of Yeezy Boost 350 V2 Dazzling Blues without any hassle. So don’t hesitate and become the new owner of these beautiful trainers.

How to style the Yeezy Slide Pure?

Nike Dunk Highs in the spotlight

Some of the best sneakers for autumn

Fantastic sneakers for the little ones

HypeBoost is the online marketplace for mainly exclusive sneakers where buyer and seller meet. You can buy and sell items at the lowest fee in Europe. HypeBoost checks everything for authentication.